The Message and the Media: Campaigning in the Age of Facebook

Hartford, CT – First it was music and stumping, then it was lawn signs and mailers. Now, it’s Facebook and Twitter. Campaigning for public office has changed drastically over the life of our democracy. Can a candidate win with a highly-programmed and controlled message in direct mail and on television? Is the press corps irrelevant in today’s campaigns? On December 5, join the Old State House for “The Message and the Media: Campaigning in the Age of Facebook” and take a look at campaigning, then and now.

At Noon, Quinnipiac University Professor of Journalism Richard Hanley explores the post-media political era and discusses the evolution of campaigning for public office. His brief presentation will be followed by a lively panel discussion moderated by the Connecticut Network’s Diane Smith. Prof. Hanley will be joined by Wayne Winsley, a recent candidate for the 3rd Congressional District; Patrick Scully, political commentator and former Director of Communications and Media for the state Senate Democrats; and Kenny Curran, campaign manager for Chris Murphy’s victorious 2012 Senate run. The presentation and panel discussion will last one hour.

Bring your lunch and enjoy this FREE program! Register for the presentation and panel discussion here

This program is made possible through funding by Connecticut Humanities.
Up Next at the Old State House: January 16, 2013, Noon, Myths and Legacy of the Emancipation Proclamation Issued on January 1, 1863 by President Abraham Lincoln, what exactly did the Emancipation Proclamation do? Join Dr. Matthew Warshauer, author of Connecticut in the American Civil War, for a spirited exploration of this famous document and its impact. The Connecticut Network’s Diane Smith will moderate a panel discussion with Dr. Warshauer;  Elizabeth Rose, historian for the Promise of Freedom exhibition at  the Fairfield Museum and History Center; and Alona Wilson, curator of the upcoming exhibit Emancipation! at the Amistad Center for Art and Culture.

’s Old State House will validate parking tickets from the State Street South Parking Garage (formerly the garage). The cost, after validating, is $5.  The ticket will be stamped once admission is paid at the museum.  The validation is good all day.

Throughout 2013, the Old State House will have a variety of lunchtime lectures and other special events and programming. Visit the calendar on www.ctoldstatehouse.org for more information.

Located in just minutes from the , Wadsworth Athenaeum and the riverfront, ’s Old State House invites visitors of all ages to discover that their voices matter, and that words, ideas, persuasion and debate really can change minds – and, quite possibly, the world.  The building served as the ’s original seat of government from 1796 to 1878. For more information on admission prices, upcoming events and parking discounts nearby, become a fan of ’s Old State House on Facebook, follow us on Twitter at www.twitter.com/CTOldStateHouse or visit us online at www.ctoldstatehouse.org.

Can a parent really make a difference in the community? The answer was a resounding “yes” from a crowd of 75 at a town-hall style meeting from the Old State House on Thursday, November 15.

Connecticut’s Old State House, in partnership with the Connecticut Network, Connecticut Commission on Children, Civic Health Index Advisory Board and the Parent Leadership Training Institute, hosted a live, televised town hall meeting entitled, Inspiring Change: Leadership Starts With You. Secretary of the State Denise Merrill provided opening remarks and the discussion was moderated by Diane Smith. The program focused on how parents and others can become community leaders with the help of the Parent Leadership Training Institute. A panel of state leaders and local school board and town council members, including State Representative Cathy Abercombie and Bridgeport community leader Donna Thompson-Bennett.

View the program here - http://ct-n.com/ondemand.asp?ID=8394
Posted by Connecticut's Old State House at 7:15 AM No comments:

Letters From the Front: A Dramatic Reading

On Wednesday, November 14, the Old State House traveled back to World War II for a dramatic reading from “Dear Eva,” a new play by Connecticut authors Paul Janensch and Catherine Ladnier based on letters written during the conflict by friends and relatives. Audience members experienced the fear and worry felt by the Greatest Generation as the letters touched on life during wartime. They explored relationships and army life with humor and an unexpected honesty.


Following the performance, the audience learned how Central Connecticut State University’s Veterans History Project preserves the stories of the men and women who have served our nation in war and peace from Director Eileen Hurst.  The project records the wartime stories of Connecticut veterans and the school is now an archive partner with the Library of Congress.

The entire program can be viewed by visiting the Connecticut Network’s On Demand section or by clicking here http://ct-n.com/ondemand.asp?ID=8391.

A trove of letters saved by Eva Lee Brown of South Carolina, were discovered after her death by her daughter, Catherine Ladnier of Greenwich. Ladnier invited Janensch, a former newspaper editor and professor emeritus of journalism at Quinnipiac University to join her as a collaborator in bringing Eva’s story to the stage.  The letters featured references to the 853rd Engineers Aviation Battalion, which included many Connecticut men.

Posted by Connecticut's Old State House at 6:30 AM No comments: 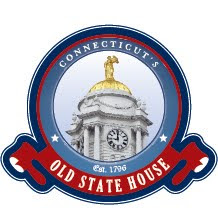 The cradle of Connecticut's -- and the nation's -- democracy